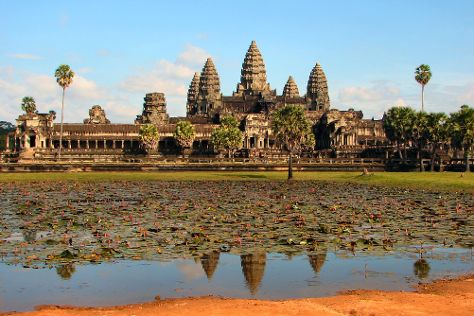 Once a small village in northwest Cambodia, Siem Reap now serves as a gateway to the Angkor region's World Heritage-listed temple and other attractions.

You'll explore and learn at Cambodia Landmine Museum and Angkor National Museum. Your cultural itinerary includes sights like Angkor Wat and Preah Khan. And it doesn't end there: contemplate the long history of Angkor Thom, contemplate in the serene atmosphere at Pre Rup, explore the ancient world of Bayon Temple, and look for gifts at Artisans Angkor.

For where to stay, more things to do, other places to visit, and tourist information, refer to the Siem Reap trip itinerary site.

Mumbai, India to Siem Reap is an approximately 10.5-hour flight. You can also drive. You'll lose 1.5 hours traveling from Mumbai to Siem Reap due to the time zone difference. Traveling from Mumbai in February, plan for a bit warmer nights in Siem Reap, with lows around 26°C. Wrap up your sightseeing on the 18th (Thu) early enough to travel to Phnom Penh.
more less

Things to do in Siem Reap

On the confluence of two major rivers, Phnom Penh occupies a scenic location largely responsible for its nickname the "Charming City." On a trip to Phnom Penh you'll discover one of Asia's most dynamic cities, where the natives live much of their lives outdoors, on the streets, and in the bustling markets filled with scents of spicy foods.

Kick off your visit on the 19th (Fri): get engrossed in the history at Tuol Sleng Genocide Museum, examine the collection at National Museum, then contemplate in the serene atmosphere at Wat Phnom, and finally pause for some photo ops at Independence Monument. On the 20th (Sat), you'll have a packed day of sightseeing: steep yourself in history at Choeung Ek Genocidal Center and then contemplate the long history of Royal Palace.

To see maps, where to stay, photos, and other tourist information, use the Phnom Penh trip itinerary planner.

Traveling by flight from Siem Reap to Phnom Penh takes 3.5 hours. Alternatively, you can drive; or take a bus. In February in Phnom Penh, expect temperatures between 38°C during the day and 26°C at night. Wrap up your sightseeing on the 20th (Sat) early enough to travel to Duong Dong.
more less

Things to do in Phnom Penh

A holiday in Duong Dong offers cultural diversity, great nature experiences, and a variety of educational and kid-friendly attractions.

Your itinerary includes some good beach time at Sao Beach and Long Beach. Your cultural itinerary includes sights like Grace’s tour and Cao Dai Temple. There's much more to do: kick back and relax at Khem Beach, stroll through Ong Lang Beach, relax and rejuvenate at Luna Thai Spa, and look for gifts at 555 King Mart.

To find maps, traveler tips, more things to do, and more tourist information, you can read our Duong Dong online trip itinerary builder.

Things to do in Duong Dong

Nestled on the banks of the Perfume River, the city of Hue remains most famous as the former home of the Nguyen Dynasty, the influence of which remains evident in local palaces, temples, forts, and museums.

Visit Tomb of Minh Mang and Tomb of Tu Duc for their historical value. Get some cultural insight at Imperial City and Lebadang Memory Space. Spend the 24th (Wed) wandering through the wild on a nature and wildlife tour. There's lots more to do: steep yourself in history at Imperial Tomb of Dong Khanh, don't miss a visit to Luc Bo Culture Space, and admire the landmark architecture of Thien Mu Pagoda.

Before you visit Hue, use our trip planner to discover what you can do and see there.

Things to do in Hue 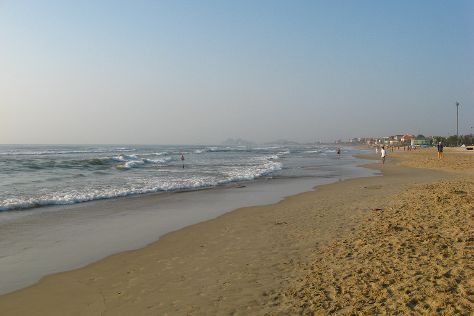 On the 27th (Sat), kick back and relax at Non Nuoc Beach, then indulge in some personalized pampering at some of the best spas, then snap pictures at Japanese Covered Bridge, and finally view the masterpieces at Ha Ha - Art In Everything. Keep things going the next day: kick back and relax at My Khe Beach and then contemplate in the serene atmosphere at Long An Temple.

For ratings, where to stay, other places to visit, and other tourist information, read our Da Nang day trip planning tool.

Getting from Hue to Da Nang by car takes about 2.5 hours. Other options: take a bus; or take a train. In February in Da Nang, expect temperatures between 30°C during the day and 23°C at night. Wrap up your sightseeing by early afternoon on the 28th (Sun) to allow time for travel back home.
more less

Things to do in Da Nang

Hoi An
Find places to stay Feb 26 — 28:
Hotels on TripAdvisor
Homes on Airbnb
Highlights from your plan