Proud of their hometown's distinct culture and dialect, many natives of Osaka describe their city as "Japan's anti-capital." An antidote to Tokyo's hectic energy, Osaka marches to the beat of its own drum, serving as the country's longtime commercial and industrial hub.

On the 28th (Thu), wander the streets of Dotombori, then see the interesting displays at Cup Noodle Museum Osaka Ikeda, then get a sense of history and politics at Mint Museum, and finally indulge in some culinary diversions at a local gastronomic tour. Get ready for a full day of sightseeing on the next day: examine the collection at Osaka Shiritsu Toyo Toji Museum, then step into the grandiose world of Osaka Castle, then have fun and explore at Kids Plaza Osaka, and finally explore the world behind art at Koji Kinutani Tenku Art Museum.

To see where to stay, other places to visit, photos, and tourist information, refer to the Osaka trip planner.

Manchester, UK to Osaka is an approximately 17.5- hour flight. You can also do a combination of flight and train; or do a combination of flight and bus. The time zone difference moving from Greenwich Mean Time (GMT) to Japan Standard Time (JST) is 9 hours. Traveling from Manchester in March, things will get a bit warmer in Osaka: highs are around 16°C and lows about 5°C. Wrap up your sightseeing on the 29th (Fri) to allow time to take a train to Kyoto.
more less

Things to do in Osaka

The national capital for over a thousand years, Kyoto retains much of the charm of old Japan, boasting numerous temples and shrines that seem completely untouched by the modern world.

You'll explore and learn at Kyoto Railway Museum and Namikawa Yasuyuki Sippo Memorial Museum. Your inner history buff will appreciate Fushimi Inari-taisha Shrine and Nijo Castle. The adventure continues: contemplate the long history of Kiyomizu-dera Temple, take a stroll through Gion, get engrossed in the history at Kyoto Museum of Crafts and Design, and don't miss a visit to Nishiki Market Shopping District.

Plan a Kyoto trip in moments using our itinerary builder.

Kyoto is just a short distance from Osaka. In March in Kyoto, expect temperatures between 16°C during the day and 5°C at night. Wrap up your sightseeing on the 1st (Mon) to allow time to take a train to Tokyo.
more less

Things to do in Kyoto

Tokyo holds the status of most populous metropolitan area in the world--a fact you'll find tangible as you walk the bustling streets and explore its diverse neighborhoods and cultures.

You'll explore and learn at Samurai Museum and Tokyo National Museum. Visit Asakusa Shrine and Senso-ji Temple for their historical value. Change things up with a short trip to Pola Museum of Art in Hakone-machi (about 1h 45 min away). The adventure continues: wander the streets of Odaiba, shop like a local with Ginza, stroll around Odaiba Kaihin Koen (Odaiba Seaside Park), and examine the collection at Edo-Tokyo Museum.

To find other places to visit, reviews, ratings, and tourist information, refer to the Tokyo trip itinerary app.

Traveling by train from Kyoto to Tokyo takes 2.5 hours. Alternatively, you can do a combination of bus and flight; or drive. In April, daytime highs in Tokyo are 22°C, while nighttime lows are 12°C. You'll have a few hours on the 5th (Fri) to wrap things up before traveling to Seoul.
more less

Things to do in Tokyo

Pola Museum of Art
Find places to stay Apr 1 — 5:
Hotels on TripAdvisor
Homes on Airbnb
Highlights from your plan

Kick off your visit on the 5th (Fri): contemplate the long history of Baek In-je's House. Get ready for a full day of sightseeing on the next day: tour the pleasant surroundings at Changdeokgung Palace, take a stroll through Bukchon Hanok Village, and then get engrossed in the history at Gyeongbokgung Palace.

You can plan Seoul trip in no time by asking Inspirock to help create your itinerary.

Things to do in Seoul 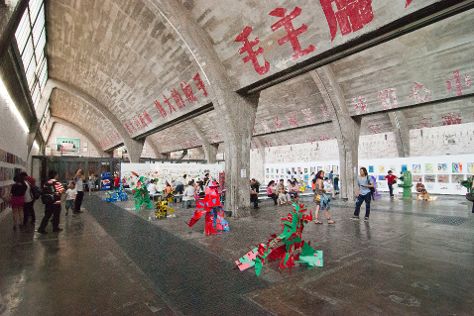 As the political and cultural capital of China, Beijing stands at the heart of Chinese history, buzzing with the energy of its high population density and centuries of importance.

Start off your visit on the 8th (Mon): stop by PAPP'S TEA. Get ready for a full day of sightseeing on the 9th (Tue): get engrossed in the history at The Palace Museum, wander the streets of 798 Art Zone, then stroll through Back Lakes (Hou Hai), and finally steep yourself in history at Bell and Drum Towers.

To see more things to do, maps, reviews, and tourist information, use the Beijing day trip planning tool.

Traveling by flight from Seoul to Beijing takes 5.5 hours. Alternatively, you can do a combination of train and flight; or do a combination of subway, ferry, and train. Traveling from Seoul to Beijing, you'll gain 1 hour due to the time zone difference. While traveling from Seoul, expect a bit warmer days and about the same nights in Beijing, ranging from highs of 26°C to lows of 9°C. Wrap up your sightseeing by early afternoon on the 10th (Wed) to allow enough time to travel to Xi'an.
more less

Things to do in Beijing

Historians often describe Xi'an, capital city for over a dozen dynasties, as the birthplace of Chinese civilization.

On the 11th (Thu), explore the ancient world of Xi'an City Wall (Chengqiang), then contemplate the long history of Big Wild Goose Pagoda (Dayanta), and then get engrossed in the history at The Museum of Qin Terra-cotta Warriors and Horses.

For reviews, other places to visit, where to stay, and tourist information, refer to the Xi'an trip builder website.

You can do a combination of flight and bus from Beijing to Xi'an in 5 hours. Alternatively, you can take a train; or drive. In April, daily temperatures in Xi'an can reach 26°C, while at night they dip to 10°C. On the 12th (Fri), you'll have the morning to explore before heading off to Shanghai.
more less

Things to do in Xi'an

The Museum of Qin Terra-cotta Warriors and Horses

Pearl of the Orient

With a nickname like the "Pearl of the Orient," it's not surprising Shanghai offers some of the most rewarding attractions and activities in the Far East.

Start off your visit on the 12th (Fri): stroll around Fuxing Park.

To find other places to visit, where to stay, photos, and tourist information, go to the Shanghai trip planning app.

Things to do in Shanghai