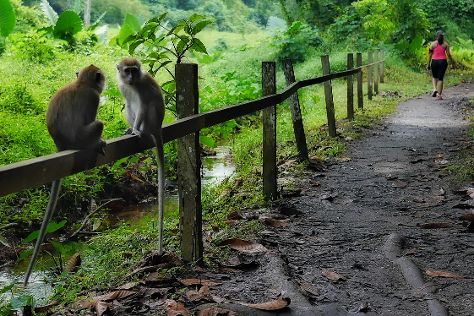 A Singapore vacation reveals the many charms of a leading city-state and regional hub of culture, retail, and tourism.

Get in touch with nature at MacRitchie Nature Trail and City Scoot. You'll explore the less-touristy side of things at East Coast Park and The Southern Ridges. The adventure continues: wander the streets of Chinatown, indulge in some culinary diversions at a local gastronomic tour, get to know the resident critters at Singapore Zoo, and have some family-friendly fun at Flight Experience Flight Simulator.

Plan a Singapore trip in moments using our itinerary builder.

Zurich, Switzerland to Singapore is an approximately 16.5-hour flight. You can also do a combination of train and flight; or do a combination of train, bus, and flight. Due to the time zone difference, you'll lose 7 hours traveling from Zurich to Singapore. Traveling from Zurich in October, things will get much hotter in Singapore: highs are around 38°C and lows about 30°C. Finish your sightseeing early on the 16th (Wed) to allow enough time to travel to Auckland.
more less

Things to do in Singapore

The largest and most populous city in New Zealand, Auckland combines a rich history and thriving contemporary culture in an abundance of museums, art galleries, and performance venues.

Step off the beaten path and head to Muriwai Gannet Colony and Orewa Beach. Get outdoors at Browns Bay Beach and Mount Eden. Explore Auckland's surroundings by going to Matakana (Matakana War Memorial & Matakana Beach Outfitters), Snells Beach (in Warkworth) and Karekare Falls (in Karekare). There's still lots to do: kick back and relax at St. Helier's Bay, hike along Brick Bay Sculpture Trail, stop by Pauanesia, and tour the pleasant surroundings at Bethells Beach.

To find more things to do, other places to visit, and more tourist information, refer to the Auckland online driving holiday planner .

Traveling by flight from Singapore to Auckland takes 14.5 hours. Alternatively, you can do a combination of bus and flight. The time zone changes from Singapore Time (SGT) to New Zealand Standard Time (NZST), which is usually a 4 hour difference. Traveling from Singapore in October, things will get much colder in Auckland: highs are around 17°C and lows about 16°C. Wrap up your sightseeing on the 19th (Sat) early enough to travel to Brisbane.
more less

Queensland’s biggest town and state capital, Brisbane has an attractive, manicured image based around its riverside aesthetic as well as the contrast between its high-rise center and extensive urban greenery.

You'll explore the less-touristy side of things at Mooloolaba Beach and Maroochydore Beach. Get in touch with nature at Scuba & Snorkeling and Kondalilla Falls. Get out of town with these interesting Brisbane side-trips: Caloundra (Dicky Beach, Bulcock Beach, &more), Buderim Forest Park (in Buderim) and Bribie Island (Bongaree Beach, Red Beach, &more). And it doesn't end there: take in the dramatic natural features at Mount Coolum, walk around New Farm Park, learn insider's secrets on a distillery tour, and see majestic marine mammals with a dolphin and whale watching tour.

Things to do in Brisbane

The Gateway to the Great Barrier Reef

A neat, cosmopolitan city of shaded plazas and laid-back neighborhoods, Cairns serves as a popular base for exploration of the surrounding region and the Great Barrier Reef, as well as a center for watersport activities like surfing or waterskiing.

Start off your visit on the 4th (Mon): admire the sheer force of Crystal Cascades, then identify plant and animal life at Cattana Wetlands, and then pause for some serene contemplation at St Monica's Cathedral.

Take the guesswork out of planning a Cairns vacation by using our trip itinerary maker.

You can fly from Brisbane to Cairns in 5.5 hours. Alternatively, you can do a combination of bus and flight; or drive. Expect somewhat warmer temperatures when traveling from Brisbane in November; daily highs in Cairns reach 36°C and lows reach 26°C. You will have some time to spend on the 5th (Tue) before leaving for Sydney.
more less

Things to do in Cairns

Lent iconic status as a result of its famous bridge and opera house, Sydney has a down-to-earth charm that enhances its spectacular setting and functional efficiency.

On the 5th (Tue), see a show at Sydney Opera House. On the 6th (Wed), you'll have a packed day of sightseeing: take in the dramatic natural features at The Gap Park, trek along Bondi to Coogee Beach Coastal Walk, tour the pleasant surroundings at Bondi Beach, kick back and relax at Clovelly Beach, then stroll through Shelly Beach, and finally enjoy the sand and surf at Balmoral Beach, Mosman.

Getting from Cairns to Sydney by flight takes about 6 hours. Other options: drive; or take a train. Prepare for slightly colder weather when traveling from Cairns in November: high temperatures in Sydney hover around 29°C and lows are around 19°C. You'll have a few hours on the 8th (Fri) to wrap things up before traveling to Auckland.
more less

Things to do in Sydney

Visit Rotoroa Island and Karekare Beach for some beach relaxation. Step out of the city life by going to Rangitoto Island and Goat Island Marine Reserve. Get out of town with these interesting Auckland side-trips: Mangawhai (Fishing Charters & Tours & Mangawhai Walkway), Nikau Cave (in Waikaretu) and Warkworth (Horse Riding Warkworth, Omaha Beach, &more). Explore Auckland further: head off the coast to Hauraki Gulf, take in panoramic vistas at SkyTower, learn about winemaking at Goldie Estate, and see the sights as you ascend with a climbing tour.

To find more things to do, other places to visit, where to stay, and more tourist information, go to the Wellington online trip maker.

Traveling by flight from Auckland to Wellington takes 3.5 hours. Alternatively, you can do a combination of bus and flight; or drive. Expect a bit cooler evenings in Wellington when traveling from Auckland in November, with lows around 13°C. You'll have a few hours on the 19th (Tue) to wrap things up before traveling to Picton.
more less

Things to do in Wellington

Gateway to the South Island

Take photo after stunning photo in Picton, the gateway to South Island.

Get ready for a full day of sightseeing on the next day: get outside with Tirohanga Track, do a tasting at Nautilus Estate, see the interesting displays at The National Whale Centre, then identify plant and animal life at Kaipupu Wildlife Sanctuary, and finally get outside with Sounds Air.

Start your trip to Picton by creating a personalized itinerary on Inspirock.

Getting from Wellington to Picton by car takes about 3.5 hours. In November, daytime highs in Picton are 20°C, while nighttime lows are 13°C. You'll have a few hours on the 22nd (Fri) to wrap things up before traveling to Christchurch.
more less

Things to do in Picton

Recovering from the earthquakes of 2010 and 2011 was no easy task, but Christchurch has faced the challenges with aplomb.

Kick off your visit on the 22nd (Fri): stroll around Groynes, take in the dramatic natural features at Sumner Beach (Cave Rock), then wander the streets of Port Hills, then tour the pleasant surroundings at Corsair Bay, and finally don't miss a visit to Canterbury Earthquake National Memorial.

To see maps, other places to visit, photos, and other tourist information, you can read our Christchurch trip planner.

Fly from Picton to Christchurch in 4.5 hours. Alternatively, you can take a train; or drive. Traveling from Picton in November, plan for slightly colder nights in Christchurch, with lows around 9°C. You'll have a few hours on the 23rd (Sat) to wrap things up before traveling to Auckland.
more less

Things to do in Christchurch

For more things to do, where to stay, and other tourist information, read our Auckland tour planning app .

Getting from Christchurch to Auckland by flight takes about 4 hours. Other options: do a combination of flight and bus; or do a combination of train and ferry. Traveling from Christchurch in November, plan for somewhat warmer nights in Auckland, with lows around 20°C. Finish your sightseeing early on the 23rd (Sat) so you can travel to Avarua.
more less

©
Take a break from the city and head to Black Rock Beach and Tikioki Marine Reserve. Discover out-of-the-way places like Cook Island Christian Church (CICC) and Punanga Nui. There's much more to do: see what you can catch with a fishing tour, take in the awesome beauty at Te Rua Manga (The Needle), tee off at Rarotonga Golf Club, and admire all the interesting features of Hospital Hill Lookout.

To find where to stay, other places to visit, maps, and more tourist information, you can read our Avarua online tour planner.

Fly from Auckland to Avarua in 5.5 hours. The time zone difference moving from New Zealand Standard Time (NZST) to Cook Is. Time (CKT) is minus 22 hours. Traveling from Auckland in November, expect Avarua to be a bit warmer, temps between 32°C and 26°C. Wrap up your sightseeing on the 26th (Tue) to allow time to travel to Aitutaki.
more less

Things to do in Avarua

Get outdoors at Aitutaki Lagoon and O'otu Beach. You'll discover tucked-away gems like One Foot Island and Mount Maungapu. There's lots more to do: get interesting insight from Tours, look for gifts at T & S Artworx, get outside with Akaiami, and admire the natural beauty at Aitutaki Secret Garden.

For where to stay, maps, photos, and other tourist information, use the Aitutaki trip builder app.

Fly from Avarua to Aitutaki in 1.5 hours. Finish up your sightseeing early on the 29th (Fri) so you can travel to Muri.
more less

Things to do in Aitutaki

To find other places to visit, ratings, maps, and more tourist information, go to the Muri road trip website .

The Route module can help you plan travel from Aitutaki to Muri. November in Muri sees daily highs of 32°C and lows of 26°C at night. On the 29th (Fri), you're off toLos Angeles.
more less

Things to do in Muri

Surrounded by mountain ranges, forests, valleys, beaches, and deserts, the metropolitan area of Los Angeles is home to over 17 million people.

Start off your visit on the 30th (Sat): tour the pleasant surroundings at Redondo Beach, stroll through Venice Beach and Boardwalk, and then see the sky in a new way at Griffith Observatory.

To see maps, photos, traveler tips, and other tourist information, you can read our Los Angeles visit planning app .

The Route module can help you plan travel from Muri to Los Angeles. The time zone changes from Cook Is. Time (CKT) to Pacific Standard Time (PST), which is usually a 2 hour difference. In November, Los Angeles is slightly colder than Muri - with highs of 28°C and lows of 15°C. Finish up your sightseeing early on the 30th (Sat) so you can travel back home.
more less

Things to do in Los Angeles