A physical and cultural bridge between Europe and Asia, the transcontinental city of Istanbul serves as a living reminder of the Roman, Byzantine, and Ottoman empires.

Istanbul is known for historic sites, museums, and shopping. Your plan includes some of its best attractions: admire the landmark architecture of Hagia Sophia Museum, let your taste buds guide you at a local gastronomic tour, get engrossed in the history at Topkapi Palace, and contemplate in the serene atmosphere at Suleymaniye Cami .

To find maps, where to stay, photos, and more tourist information, read our Istanbul trip planner.

Porto, Portugal to Istanbul is an approximately 8-hour flight. You can also drive; or do a combination of car and train. Traveling from Porto to Istanbul, you'll lose 3 hours due to the time zone difference. In May, daily temperatures in Istanbul can reach 25°C, while at night they dip to 15°C. Wrap up your sightseeing by early afternoon on the 10th (Wed) to allow enough time to travel to Male.
more less

Things to do in Istanbul

Historic Sites · Museums · Tours
Find places to stay May 30 — Jun 10:
Hotels on TripAdvisor
Homes on Airbnb
Highlights from your plan 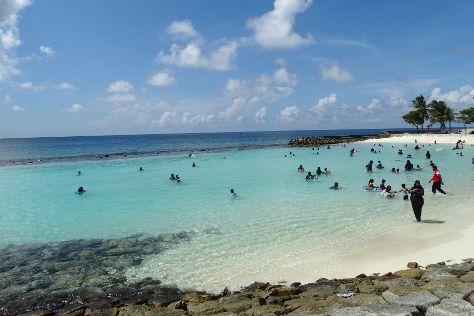 The tiny but densely populated city of Male represents a contrast to the laid-back beach resorts found in much of the rest of the Maldives.

Male is known for shopping, wildlife, and historic sites. Your plan includes some of its best attractions: take in the spiritual surroundings of Hukuru Miskiiy (Old Friday Mosque), look for gifts at Island Bazaar, snap pictures at Sinamale Bridge, and hunt for treasures at Male Fish Market.

For where to stay, maps, other places to visit, and more tourist information, read Male trip itinerary maker tool.

Traveling by combination of flight and ferry from Istanbul to Male takes 11.5 hours. The time zone changes from Turkey Time (TRT) to Maldives Time (MVT), which is usually a 2 hour difference. Traveling from Istanbul in June, expect Male to be somewhat warmer, temps between 36°C and 31°C. Wrap up your sightseeing on the 14th (Sun) early enough to ride a ferry to Hulhumale.
more less

Things to do in Male 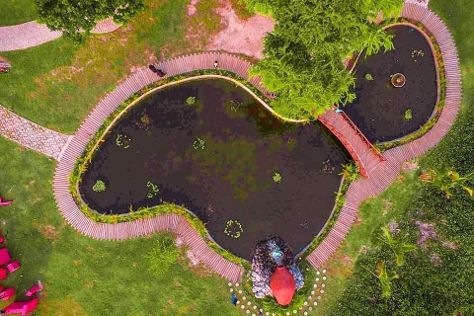 On the 15th (Mon), admire the majestic nature at Hulhumale Central Park and then get some thrills on the water with a speed boat tour.

To see photos, more things to do, where to stay, and other tourist information, you can read our Hulhumale holiday maker website.

Getting from Male to Hulhumale by ferry takes about an hour. In June, plan for daily highs up to 36°C, and evening lows to 31°C. Cap off your sightseeing on the 15th (Mon) early enough to travel to Colombo.
more less

Things to do in Hulhumale

The commercial capital of the country, Colombo has added modern touches to its colonial-era core, creating an exciting and eclectic coastal city.

Explore the numerous day-trip ideas around Colombo: Bentota Beach (in Bentota), Spas & Wellness (in Unawatuna) and Galle Fort (in Galle). There's still lots to do: don't miss a visit to Kelaniya Raja Maha Vihara, walk around Galle Face Green, contemplate in the serene atmosphere at Gangaramaya (Vihara) Buddhist Temple, and get outside with Outdoor Activities.

For other places to visit, more things to do, traveler tips, and tourist information, go to the Colombo trip planner.

Getting from Hulhumale to Colombo by flight takes about 4.5 hours. The time zone difference moving from Maldives Time (MVT) to India Standard Time (IST) is 0.5 hours. Expect a daytime high around 37°C in June, and nighttime lows around 30°C. Wrap up your sightseeing on the 19th (Fri) early enough to travel to Kandy.
more less

Things to do in Colombo

Get out of town with these interesting Kandy side-trips: Dhilip De Alwis (in Habarana) and Sigiriya (in Sigiriya). There's much more to do: take in the spiritual surroundings of Temple of the Sacred Tooth Relic, admire the natural beauty at Royal Botanical Gardens, tour the pleasant surroundings at Knuckles Forest Reserve, and play a few rounds at RB Tours Srilanka.

To find maps, ratings, other places to visit, and other tourist information, refer to the Kandy online day trip planner.

Things to do in Kandy

Enjoy cultural, historical, and culinary exploration during your holiday in Bangkok, the capital of Thailand and the most populous city in the country.

Change things up with these side-trips from Bangkok: Ayutthaya (Chantharakasem National Museum & Wat Maha That). Next up on the itinerary: contemplate the long history of The Grand Palace, admire the striking features of Jim Thompson House, relax and rejuvenate at some of the best spas, and stop by Tom's Fashion.

Things to do in Bangkok

Ayutthaya
Find places to stay Jun 24 — 30:
Hotels on TripAdvisor
Homes on Airbnb
Highlights from your plan 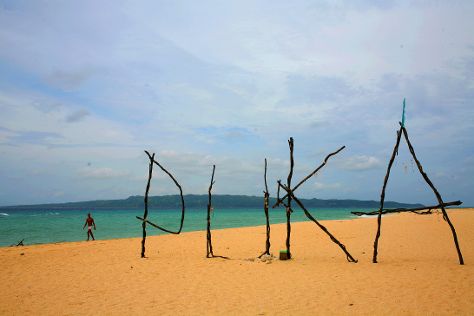 All of 7 km (4.3 mi) long, the island of Boracay remains an idyllic destination drawing beach-goers from around the world.

Boracay is known for beaches, nature, and wildlife. Your plan includes some of its best attractions: stroll through Yapak Beach (Puka Shell Beach), kick back and relax at Ilig Iligan Beach, indulge in some personalized pampering at some of the best spas, and head outdoors with Scotty's Action Sports Network, Inc. Boracay.

To find where to stay, other places to visit, more things to do, and other tourist information, read our Boracay itinerary planner.

Traveling by combination of flight and ferry from Bangkok to Boracay takes 9.5 hours. The time zone changes from Indochina Time to Philippine Standard Time, which is usually a 1 hour difference. When traveling from Bangkok in June, plan for slightly colder days and about the same nights in Boracay: temperatures range from 36°C by day to 30°C at night. Finish up your sightseeing early on the 6th (Mon) so you can travel to Manila.
more less

Things to do in Boracay 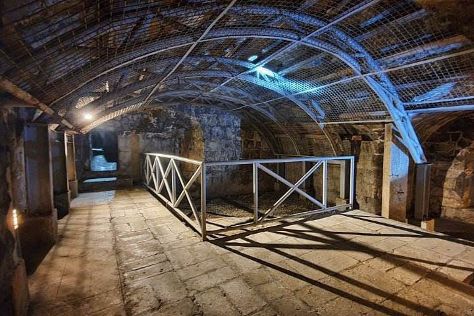 Pearl of the Orient

The capital of the Philippines and the "Pearl of the Orient," Manila truly resembles a gem: rough on the outside, but glittering within.

Take a break from Manila with a short trip to Manila American Cemetery and Memorial in Taguig City, about 46 minutes away. And it doesn't end there: contemplate the long history of Fort Santiago, soothe aching muscles at some of the top local wellness centers, examine the collection at National Museum, and discover the deep blue sea with a scuba or snorkeling tour.

For traveler tips, where to stay, more things to do, and more tourist information, go to the Manila online road trip planner.

Things to do in Manila

Kick off your visit on the 11th (Sat): take in the spiritual surroundings of Temple of St. Seraphim of Sarov, then buy something for everyone on your list at Khan Shatyr, then pause for some serene contemplation at Nur-Astana Mosque, and finally take in panoramic vistas at Bayterek Tower. Here are some ideas for day two: pause for some photo ops at Monument to the Soldiers of World War II, then explore the wealth of natural beauty at Bauyrzhan Momyshuly Park, and then contemplate in the serene atmosphere at Hazret Sultan Mosque.

To see other places to visit, ratings, and tourist information, you can read our Nur-Sultan travel itinerary planner.

Things to do in Nur-Sultan 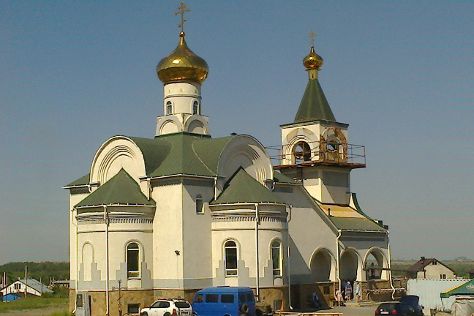 Lying in the heart of Kazakhstan, Karaganda stands as the capital of its region in a vast landscape of unpopulated steppe.

Step out of Karaganda with an excursion to Temirtausky City Local Lore and History Museum in Temirtau--about 38 minutes away. There's much more to do: see the interesting displays at Karaganda Regional Museum, appreciate the history behind A.S. Pushkin Monument, take in the awesome beauty at Bektau-Ata Mountain Area, and take in the architecture and atmosphere at Cathedral of the Blessed Virgin Mary of Fatima.

To see more things to do, maps, other places to visit, and tourist information, read Karaganda online attractions planner.

Getting from Nur-Sultan to Karaganda by car takes about 3 hours. Other options: take a train; or take a bus. Expect little chillier evenings in Karaganda when traveling from Nur-Sultan in July, with lows around 12°C. Cap off your sightseeing on the 15th (Wed) early enough to travel to Almaty.
more less

Things to do in Karaganda

©
Monument to Victims of Political Repression 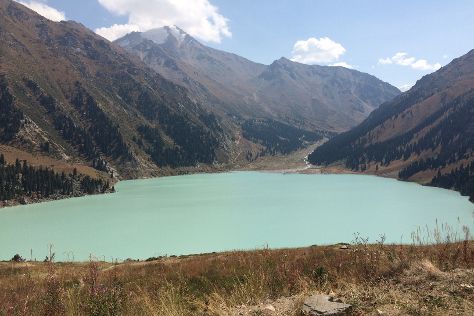 Almaty is known for parks, historic sites, and nature. Your plan includes some of its best attractions: explore the activities along Big Almaty Lake, don't miss a visit to Iversky Seraphimovskiy Nunnery, examine the collection at Central State Museum of Kazakhstan, and laugh and play at Almaty Central Park.

To find maps, other places to visit, reviews, and tourist information, you can read our Almaty trip builder app.

Getting from Karaganda to Almaty by flight takes about 8.5 hours. Other options: take a train; or drive. Traveling from Karaganda in July, expect Almaty to be somewhat warmer, temps between 36°C and 22°C. Wrap up your sightseeing on the 19th (Sun) to allow time to travel to Goreme.
more less

Things to do in Almaty

Famed for its landscape of unusually shaped stone formations and churches cut into the natural rocks, Goreme sits in the central part of the country, an area originally settled during Roman times.

Change things up with these side-trips from Goreme: Gomeda Vadisi (in Mustafapasa) and Derinkuyu (Kaymakli Underground City, Uzumlu Kilise, &more). Next up on the itinerary: get outside with Outdoor Activities, get to know the fascinating history of Goreme National Park, appreciate the views at Gulludere Vadisi, and stop by Alaturca Taner.

Things to do in Goreme

Offering both sandy beaches packed with modern amenities and a historical town center filled with Roman ruins and Ottoman mosques, Antalya serves as one of the country's major tourist destinations.

Explore Antalya's surroundings by going to Aspendos Ruins and Theater (in Serik) and Hip-Notics Cable Ski (in Cakis). Next up on the itinerary: wander the streets of Kaleici, delve into the distant past at Perge Ancient City, go for a stroll along the water at Old City Marina, and take in the dramatic scenery at Lower Duden Waterfalls.

To find traveler tips, other places to visit, and more tourist information, refer to the Antalya trip planner.

Traveling by flight from Goreme to Antalya takes 6.5 hours. Alternatively, you can drive; or take a bus. Traveling from Goreme in July, expect Antalya to be somewhat warmer, temps between 41°C and 27°C. Finish up your sightseeing early on the 28th (Tue) so you can travel back home.
more less

Things to do in Antalya